One of the most daunting parts about starting a new hobby or craft is knowing where to begin. The choices of what you need, what to look for, what brands are good quality, etc. can sometimes be so overwhelming that you decide not to begin on your adventure of learning something new at all.

Learning how to play the banjo is no different. There are different types of banjos and plenty of new terminology for parts of banjos and playing styles. Aspiring players also wonder what makes one banjo better than another.

In this guide, we strive to provide a firm introduction of all things banjo. We have provided links throughout the guide that will allow you to delve deeper into the subject in question. We hope that we are able to answer your questions here for you so your entrance into the banjo world is an easy one.

The first thing you need to understand is that there are several different types of banjos that are each traditionally used for different genres of music, that are tuned differently, and played differently using different techniques. There are tenor banjos, plectrum banjos, 5 string banjos, 6 string banjos, and banjo ukuleles. In the early 20th century there were other hybrid banjo instruments such as banjolins (banjo/mandolin). But what do they all sound like? How are they different? Let’s have a look. 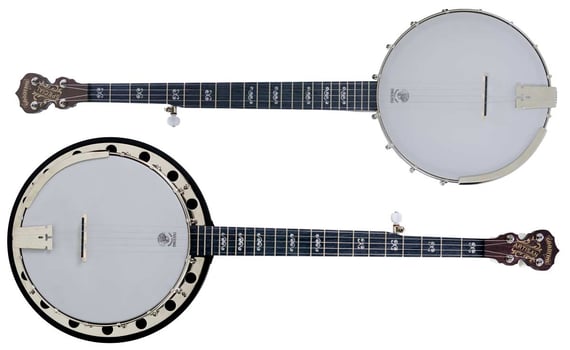 Throughout the course of your journey, you will hear a lot of new terms, including "openback" and "resonator".

A resonator is the back of a banjo that helps to reflect the sound out to your audience, thus making the banjo sound louder and brighter. In certain styles of music where the banjoist will take a solo, such as in bluegrass or jazz, a resonator would be preferred because you want to be able to be heard, against the rest of the band when you step out to take a solo.

On the other hand, the openback is exactly what the name suggests. It has no resonator and therefore, an open back. Folk musicians or singer songwriters commonly pick up the openback for a milder, more graceful approach.

It is important to note that any type of banjo can be either an openback or a resonator banjo.

The most important thing to keep in mind is that although you will read and hear endless opinions that certain banjos are for certain styles, or that the only "real" banjo is a 5 string banjo, these are merely guidelines. The reality is this is music. Yes, some types of banjo will be more suited for what you are trying to achieve than others, but this is still music. Last time we checked, music and the creativity that lies within, was never supposed to be bound by rules. You can play whatever style on whatever banjo you like so long as it sounds good to you.

The type of music traditionally played on a 5 string banjo is bluegrass and folk music. Other styles such as ragtime and blues have been played on it throughout it’s history. In the past 30 plus years with groundbreaking artists such as Bela Fleck, the traditional styles have been blown up and modern jazz, classical, world music, and more have been played at a very high level on the banjo.

Typically, when starting out on the 5 string banjo, you will be introduced to one of two styles. 3 finger style would be reminiscent of a bluegrass/Earl Scruggs style and is normally played on a resonator banjo with a heavy tone ring. The player would wear two finger picks and a thumb pick and pluck the strings using a technique called "rolls".

Banjo power couple Bela Fleck and Abigail Washburn offer a wonderful explanation on the differences between the two, which we encourage you to watch for a more in depth look.

The 4 string family of banjos is broken down into two types of banjos:

Tenor banjos are tuned in 5ths the same way a violin, viola, cello or other instruments from the string family would be. Mandolins use this same type of tuning. This type of banjo is traditionally used for early traditional jazz or Irish music. Traditional jazz tenor banjo players tune the banjo C,G,D,A like a viola and most will use a 19 fret tenor banjo. Jazz tenor players typically will use a flatpick to strum chords and play single note lines. When taking a solo, often tenor banjo players will use what is called a chord melody solo.

Who uses a 17 Fret Tenor Banjo?

What is a Plectrum Banjo?

After the tenor banjos, the other 4 string banjo is the plectrum. The easiest way to understand a plectrum banjo is to imagine it as a 5 string banjo without the 5th string. It has the same number of frets as the 5 string banjo and its tuning is very similar to the standard 5 string tuning of open G, except the 4th string is tuned down to a C, instead of the D.

This makes the tuning C,G,B,D, instead of D,G,B,D that you have on the top four strings of a 5 string banjo. Like the tenors, this type of banjo is played with a flat pick or “plectrum” and is commonly used for traditional jazz.

The plectrum banjo is also sometimes used for other styles of music such as folk, for those who wish to strum the banjo rather than using finger picks. In this case, the plectrum is often favored since you won’t accidentally hit the 5th string every time you strum.

Chicago Tuning for the Guitar Player

As you start to go deeper into the plectrum world, you will inevitably stumble on the term "Chicago tuning". Chicago tuning is a way of tuning a plectrum banjo like the top 4 strings of a guitar. This would make the tuning D,G,B,E making the plectrum an easy crossover instrument for guitar players.

We do get asked if this tuning can be achieved on a tenor banjo. The simple answer is that although it can be done on tenor banjos, it normally requires some changes in string gauge, which is why it is much easier to achieve with a plectrum.

Despite the obvious similarity in the number of strings, banjo ukuleles are typically not grouped in with the other 4 string banjos because it is more of a hybrid instrument. These banjos are exactly what you would imagine them to be; they are ukulele necks mounted to a banjo body.

Banjo ukuleles are tuned like a regular ukulele and are strung with the same nylon strings, thus you get a tone somewhere between that of a ukulele and a banjo. With that, the banjo ukulele's are great for those who play the ukulele and want another tone in their arsenal.

Like ukuleles, these are seriously addictive and a lot of fun to play and a great addition to any uke enthusiasts collection.

6 string banjos are another hybrid banjo that merges a guitar neck with a banjo body and are tuned and played just like a guitar. These banjos often get a bad rap for not being a “real” banjo, suggesting that one would be cheating by playing a 6 string banjo and not learning 5 string. This couldn’t be further from the truth. The 6 string banjo has been around for over 100 years and has made major contributions to American music. Louis Armstrong’s banjo player, Johnny St. Cyr, Reverend Gary Davis, and Danny Barker famously played 6 string banjos. Before the electric guitar came along in the 1930’s, guitar players would play the banjo when they needed to be heard.

Today, 6 string banjos are used by guitarists to get a banjo tone in many different genres. Artists as diverse as guitar heroes Joe Satriani, Keith Urban, Rod Stewart, through to Taj Mahal, and pop sensation Taylor Swift have all built the 6 string banjo into their sound. Guitarists are always searching for new tones with pedals and different types of guitars, and the 6 string banjo should be thought of no differently. It gives guitarists another tone in their arsenal.

So, there you have it. A comprehensive guide to starting out on the banjo. As you now know, banjos come in a huge variety of shapes and sizes. and ultimately, which path you decide to take depends on what musical style you enjoy. There is a plethora of learning material available for all styles of banjo. You just have to play what makes you happy.

Find a song you want to play that excites you. Focus on that song and learn to play it. A lot of songs are written out in banjo tab to make it easy to learn. A quick Google search will help you find the banjo tab you are looking for. To learn what banjo tab is and how to read it click here. You can start simple and learn to embellish. Discover what excites you. What you wake up thinking about and go to sleep dreaming about. And most of all, have fun with the musical freedom that comes with playing the banjo.

Now, what are you waiting for?

Start playing and see what you're missing!