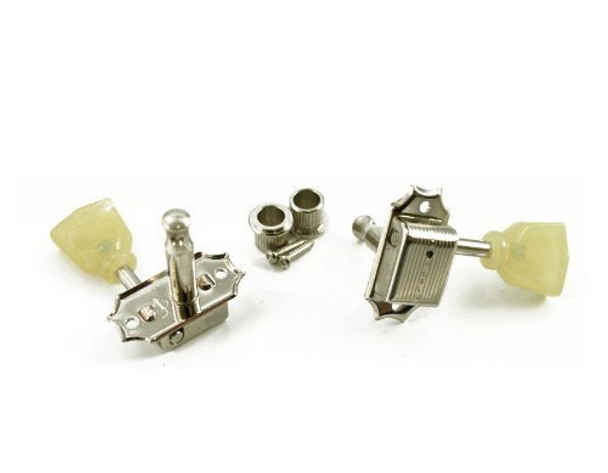 These Kluson tuning machines were used on vintage Gibson guitars such as the Les Paul, SG, ES 335 and others. They're also used on the Epiphone Casino and current Epiphone production of Les Paul and G 400 (SG) models. This model of Kluson tuning machines is also a direct replacement for all current reissue 50's and 60's Gibson production and other series that use a vintage style individual tuning machine. This kit comes with six individual tuners, 3 per side (that are not on a plate). All hardware including bushings and mounting screws are included in the set. Please note: If you are retro fitting a vintage instrument that has been modified or putting this vintage style Kluson tuner on a modern instrument you may also need to purchase "adapter bushings" (sold separately) to convert a larger size peg hole to vintage size to allow for proper fit and function. These guitar tuners were historically used on the following guitars: 1958 1959 Gibson Flying V 1958 1959 Gibson ES 345 1956 1959 Gibson ES 295 1956 1959 Gibson J 200 1956 1959 Gibson ES 350 1956 1959 ES 5 1957 Gibson Explorer Prototype Futura 1959 Epiphone Crestwood Deluxe

MSRP:
Now: $50.49
Was:
These super tuners are recognized as such around the world. The SG381 feature a 16:1 gear ratio and has evolved through improvement without compromise at any stage and come equipped with a...