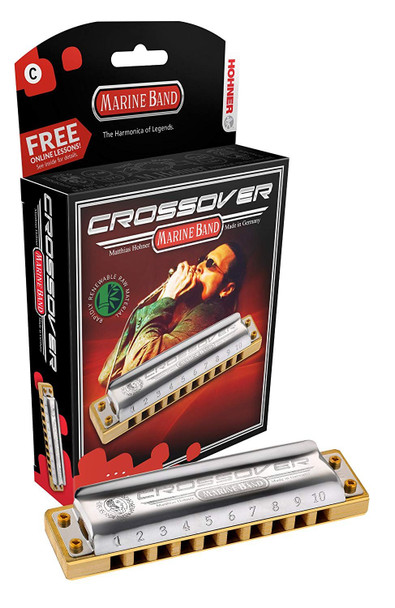 Marine Band Crossover With the Crossover we have expanded the Marine Band series to introduce a new, top-of-the-line professional quality instrument for the discerning player in modern blues, rock, jazz, soul or funk. The revolutionary laminated bamboo comb (patented) is completely sealed, making it water repellent and exceptionally stable. In combination with the screw together assembly the Crossover is extremely airtight, with fast, even response and a raspy, powerful sound which is exceptionally well suited to amplified playing as well as acoustic styles. The modern compromise tuning is ideal for single note playing in different positions in a wide range of contemporary styles, while still retaining a full chord sound, making the Crossover an optimal addition to the great Marine Band range.

MSRP:
Now: $47.99
Was:
Marine Band (#1896) – The one, the only, the original -- the harp that was there when harmonica blues was born.  Made famous when played by every serious harmonica player from Little Walter to...

MSRP:
Now: $44.99
Was:
The Hohner Marine Band harmonica has been in use by harmonica players since 1896. Its pearwood body, brass reeds and design patented covers have made it the mainstay of Blues Masters for years...